Findings from BCS70 have demonstrated the importance of adult literacy and numeracy. These basic skills are not important for only for employability, but for family and community life as well.

The research has been instrumental in making the case for policies that support adult learning, in an effort to protect disadvantaged adults from poverty, ill health and marginalisation.

When we take all these measures together, we can see how your basic skills have developed over the course of your lives, and in some cases, how they have been passed on to the next generation.

We can also use this information to determine how literacy and numeracy are related to the other aspects of your lives that we ask about regularly, including employment, health and relationships.

The state of adults’ basic skills 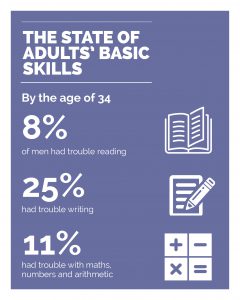 More men said they had difficulties with spelling and handwriting, whereas more women reported problems with arithmetical operations such as multiplication and division.

Many adults with the lowest skills – at the standard expected of 7 to 9-year-olds – had grown up in poor family circumstances, and had limited educational achievement and low aspirations growing up. However, often once people recognised that they had poor skills, they were motivated to improve them.

Men with a poor grasp of literacy or numeracy spent more of their working lives unemployed or sick than their more highly skilled peers. Women with low skills were more likely to take care of the home full-time than those with higher skills.

Low-skilled men and women who did work were far more likely to be in labour-intensive, low-skilled jobs, often in the less secure and unregulated parts of the labour market. They also had fewer opportunities for in-work training.

Basic skills and other areas of life

Men and women with the lowest skills reported poorer health and mental wellbeing than their more highly-skilled peers, and they were also less likely to vote.

Men with poor skills tended to be single in their mid-30s and not have any children. Women with the same low skills levels were also more likely to be without a partner, but more likely to be parents, often with large families.

Passing skills to the next generation

It appeared that the children of parents with low skills also struggled with reading and maths. For example, the vocabulary scores of 3-year-olds whose parents had very low skills levels were 20 per cent below those whose parents had achieved good GCSEs. There were also substantial gaps among 6- and 7-year-olds.

The researchers said that there was an unmet demand for literacy and numeracy classes specifically aimed at parents: “almost all parents want to help their children do well at school so such classes can create a virtuous circle of learning achievement for both parents and children.”

How has the research made a difference?

This research informed the influential Moser report (1999), which made the case for launching Skills for Life, a major government initiative launched in 2001 to tackle the literacy, language and numeracy needs of the UK’s adults. The findings have also been used to underline the value of family literacy programmes and early years’ initiatives such as Sure Start and the government-sponsored Early Intervention Foundation.

In Scotland, the findings helped to justify Skills for Scotland’s strategy to improve the literacy and numeracy skills and practices of the adult population. This included a multi-million pound investments in resources for adult learners. The research is also used in the Masters in Educational Practice programme for new teachers that Wales introduced in 2012.

The findings have also been used by countries as far away as New Zealand, Australia and Canada.

There have been a number of 'sub-studies' that have collected information from a smaller number of study members on special topics, such as child development and adult basic skills. Find out more.

The Age 30 Survey took place between 1999 and 2000. The survey sought to continue to follow your journey through adulthood. Just over 11,000 of you took part. Find out more about what we asked you at age 30.

The Age 34 Survey took place between February 2004 and June 2005. Just under 10,000 of you took part. At this age we also asked those of you who were parents to tell us a bit more about your children’s lives. Find out more about what we asked you at age 34.