BCS70 has produced some of the most influential evidence on the importance of reading for pleasure. 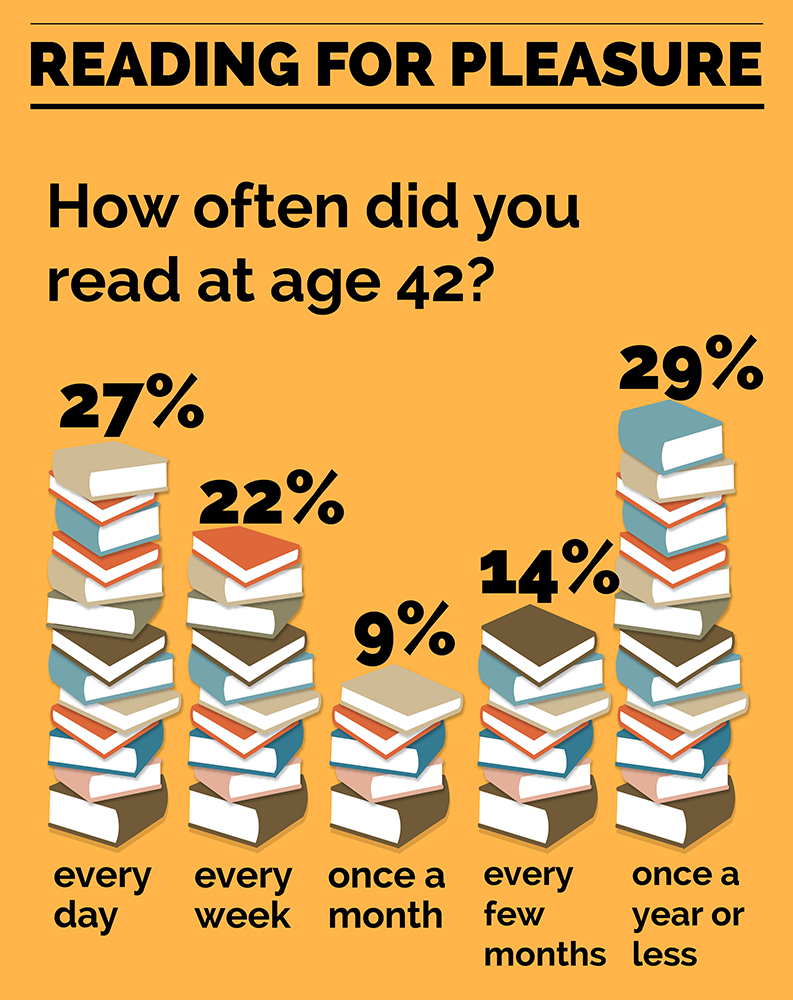 When you were aged 10 and 16, we asked you how often you read for pleasure, and the kinds of things you liked to read. We have also asked you to complete cognitive assessments throughout your lives, and at ages 16 and 42, we also gave you a vocabulary test.

Reading for pleasure puts children ahead in the classroom

Children who read for pleasure made more progress in maths, as well as vocabulary and spelling, between the ages of 10 and 16 than those who rarely read while growing up. This was true even after taking into account social background.

Perhaps surprisingly, reading for pleasure was found to be more important for children’s cognitive development between ages 10 and 16 than their parents’ level of education. The combined effect on children’s progress of reading books often, going to the library regularly and reading newspapers at 16 was four times greater than the advantage children gained from having a parent with a degree.

BCS70 has also shown that reading for pleasure during childhood has a substantial influence on vocabulary 30 years later. Those who had regularly read for pleasure at 10 scored, on average, 67 per cent in the age 42 vocabulary test, whereas infrequent childhood readers scored only 51 per cent.

What you read appeared to matter as much as how often you read, and that those who read ‘highbrow’ fiction made the greatest advances in vocabulary between ages 16 and 42. People who read broadsheet newspapers (including online versions) made more progress than people who did not read newspapers, while readers of popular tabloids actually made slightly less progress than those who never read newspapers.

How has the research made a difference?

The findings have been used to help protect library services, to persuade children of all ages to spend more time reading, and to encourage parents to support schools’ home reading initiatives.

Local authorities, libraries and library associations, campaigning groups and charities have all used the findings to shape policies on reading and libraries at the national, regional or individual library/school level. Similar groups abroad have used the findings to influence policies in their own countries, including Australia, New Zealand, Canada, and the United States.

A number of schools across the UK shared the research with their teachers, parents and pupils – one school in Leicestershire even assigned it as homework!

The Age 10 Survey took place between 1980 and 1981, with nearly 15,000 of you taking part. The survey examined mid-childhood health, care, education, social and family circumstances. Find out more about what you were asked at age 10.

The Age 16 Survey took place in 1986, capturing information on continued social, physical and educational development throughout your teenage years. Almost 12,000 of you took part. Find out more about what we asked you when you were 16.

The Age 42 Survey took place between May 2012 and April 2013, and almost 10,000 of you took part. It was the first survey to capture what your lives are like in middle age. Find out more about what we asked you at age 42.