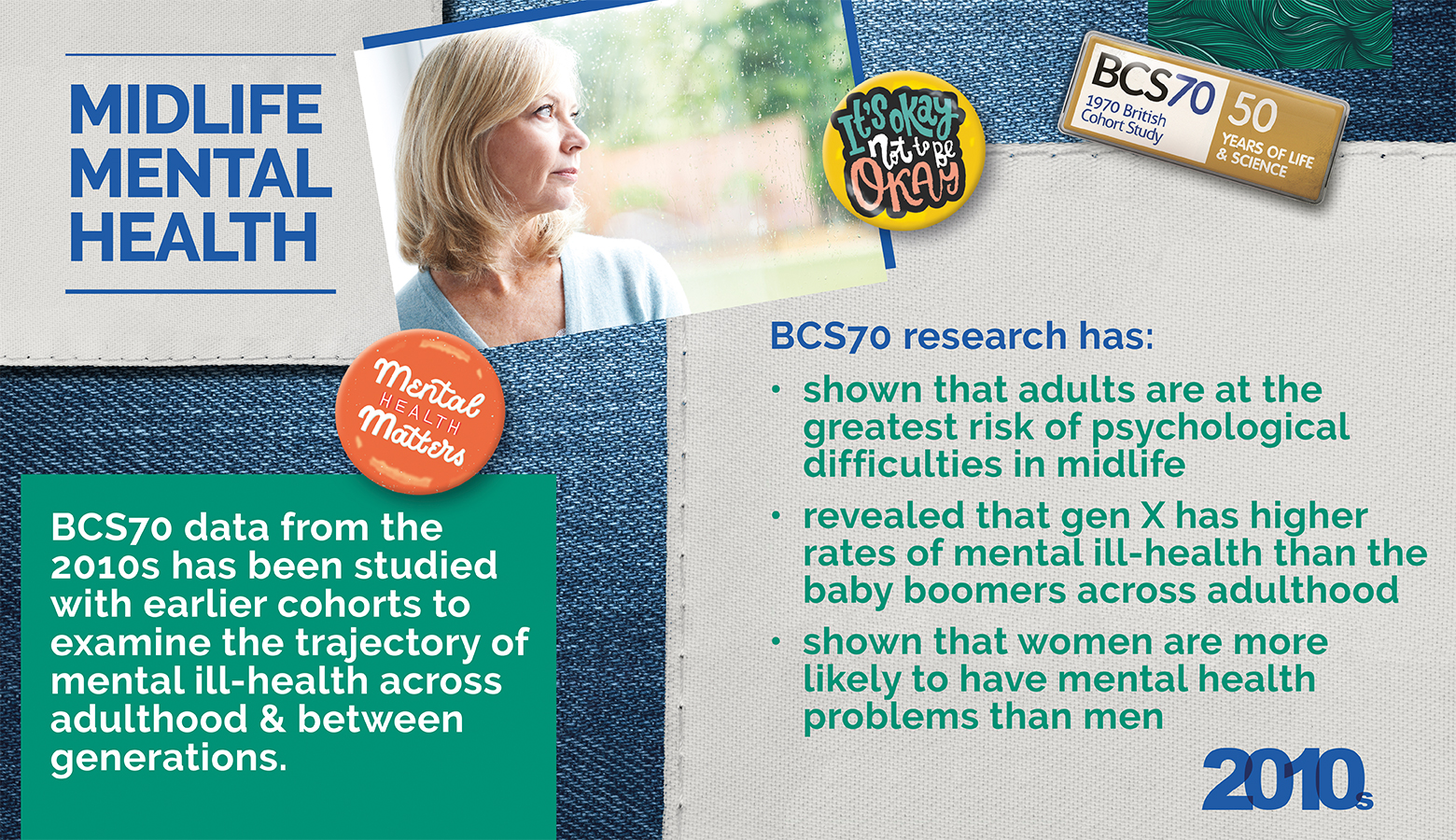 BCS70 has been an important source of evidence on midlife mental health, helping to improve our understanding about why it’s such a vulnerable period for adults.

Used in conjunction with similar studies of people born in 1946 and 1958, BCS70 has shown how psychological problems develop across people’s lives, and how rates vary between generations. For example, one study examined study members’ reports of their mental health between the ages of 23 and 69 to reveal that baby boomers and generation X were at greatest risk of psychological distress in midlife.

Across all three generations, at all ages, levels of mental ill-health were higher among women than men. At age 46, 23% of women of your generation had mental health problems compared to 17% of men.

Another study revealed that BCS70 study members were more likely than those born 12 years earlier to report symptoms of psychological distress at age 42, such as depression and anxiety.

The research found that the increase in mental health problems between the generations was steeper among men than women. For those born in 1958, 10% of men suffered from distress at age 42, compared to 16% of BCS70 members. Although women were more likely than men to report poor mental health in both generations, the rate rose less sharply for them – from 16% for those born in 1958 to 20% for your generation.

For women, never being breastfed, having a mother who smoked during pregnancy, as well as conduct and emotional problems at age 16, accounted for a small fraction of the differences in mental health between the two generations at 42.

Academics have suggested that middle age is a particularly vulnerable period for mental health as adults tend to acquire increasing responsibility in their careers, which leads to reduced leisure time, and elevated job-related stress. Midlife is also often associated with changes to family structure, which may be linked with mental health. And, as people approach their 50s, they are also more likely to be parents and simultaneously care for ageing parents.

Researchers have also speculated on why generation X have higher rates of psychological distress than previous generations. They think that entering the labour market during a period of high unemployment in the late 1980s and early 1990s, and also difficulties getting on the housing ladder could be factors that have had a lasting effect on your generation’s mental health.

Information and advice on mental health is available at: https://www.nhs.uk/conditions/stress-anxiety-depression/

Psychological distress from early adulthood to early old age: Evidence from the 1946, 1958 and 1970 British birth cohorts

Psychological Distress in Mid-Life: Evidence from the 1958 and 1970 British Birth Cohort