People who get moderate to vigorous exercise also have higher mental wellbeing, according to findings from BCS70.

But time spent sitting was only linked to lower wellbeing for people who took very little exercise at all. For others, it wasn’t so much sitting itself that affected wellbeing, but what they were doing while they were sitting. 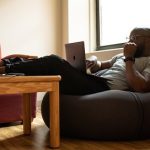 When we visited you when you were between 46 to 48 years old, you may remember we asked you to wear an activity monitor on your thigh for seven days. The data from these devices allow researchers to determine how much time, on average, people spend sitting, walking and taking more vigorous exercise.

We also gave you a list of different everyday physical activities, like carrying groceries or climbing stairs, and asked you how often you do these things. We asked you similar questions about how much time you spend doing things like watching TV, playing video games, browsing the internet and reading books.

What the researchers found

Researchers from the UK, Brazil and Australia compared the mental wellbeing scores of people who were more and less physically active. They found that, for everyone, wellbeing scores went up with every additional hour of moderate to vigorous exercise they took. This was true even when accounting for other factors that are known to affect physical activity and mental wellbeing, such as gender, health, education, socioeconomic status, smoking, body mass index, disability and psychological distress.

Why do these findings matter?

Previous research has also shown that time spent being active and time spent sitting can affect mental illness, but their connection to mental wellbeing is not very well understood. This BCS70 research is thought to be the first large-scale study of the relationship between mental wellbeing and physical activity.

The findings suggest that public health advice to keep active could improve mental wellbeing among people your age. Importantly however, the findings also suggest that simply advising everyone to spend less time sitting would not be effective. In fact, it may inadvertently discourage activities like reading that can have a positive effect on mental wellbeing. Instead, the researchers recommend taking a closer look at the difference between ‘mentally-active’ and ‘mentally-passive’ sitting time to determine the best ways to promote mental wellbeing.

Find out more about this research

The full research paper, ‘Device-measured physical activity and sedentary behaviour in relation to mental wellbeing: An analysis of the 1970 British cohort study’ by Nipuna Senaratne and colleagues was published in the scientific journal Preventive Medicine in January 2021. An open-access version of the article is available through UCL Discovery.