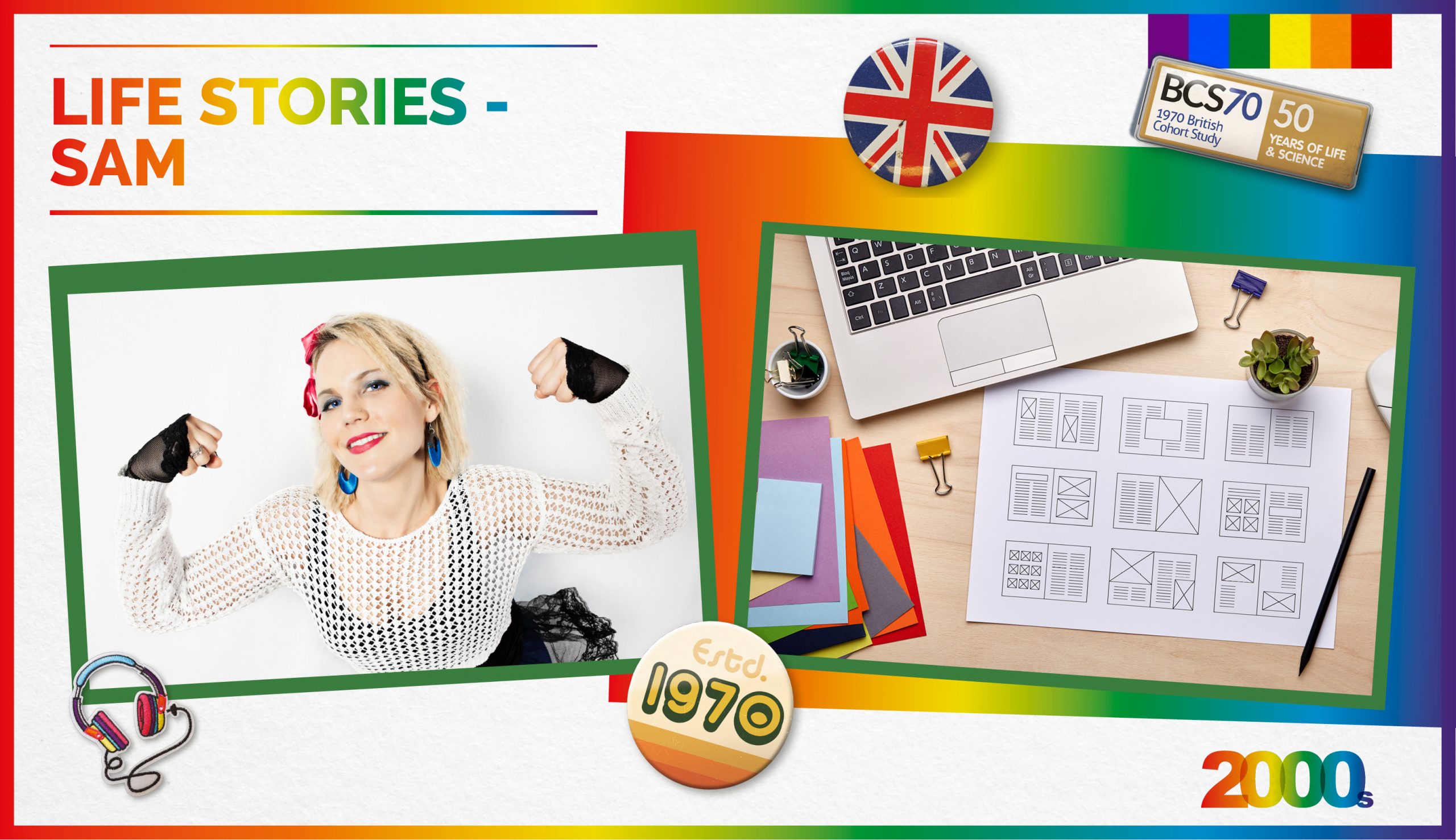 “Young people should be given more opportunity to travel. We should be educated in taxes, civil rights, and what life is really like. I haven’t got any major gripes about the way things are but the attitude of the English people holds back the nation, the attitude that success is bad and to be a loser is a joke, especially for women.”

This was how Sam answered a question in the age 16 survey asking how satisfied she was with life, and what would make life better and more interesting for teenagers. Now, more than three decades on, Sam is surprised by how ‘feisty’ she was as a 16-year-old but also agrees with many of her teenage sentiments.

“It is quite interesting as an adult to revisit the beliefs I held as a teenager. I still believe teenagers should have a rounded education about real-life – taxes, mortgages and the like. I also recognise there were some feminist ideals being nurtured during my formative years, which was probably the result of attending an all-girls’ school. Now, in my adult life I wouldn’t necessarily say I am nearly as feisty or vocal about those things but clearly ‘16-year-old me’ was.”

With Sam’s first memories of taking part in the 1970 British Cohort Study going right back to the mid-1970s, she really started to feel a connection to the study when she took part at age 10.

“I can remember being taken out of the classroom when I was in primary school and being ushered into the headteacher’s office, alone, to do the written multi-choice tests. It always seemed mysterious and I didn’t really understand what I was contributing to at the time but I was told that I was in this special group of people, and I was made to feel super special.”

Sam can recall the first time she ‘connected’ with another member from the study at the grammar school she attended in her home county of Lincolnshire.

“I was chatting about the study to another friend and my fellow member overheard and said: ‘I’m one, too!’ After that chance conversation, although we had a different set of friends, we knew we always had that in common with each other. When you make a connection with another participant, it is like finding a long-lost family member.”

Around six years later, Sam remembers being in the middle of taking her O-levels when she was asked to take part in the famously huge age 16 Youthscan survey.

“I can remember doing the teenage one and there being a few questions what would have been really awkward for a teenager to answer, on periods, sex, and all that sort of stuff. It was just like, ‘urgh, cringey’. But equally, nobody really asked you any of those things either. In your peer group, you might have those kinds of chats, but obviously, you knew this was going back to adults. It felt like we were being taken seriously, that the information we were giving was important.”

Sam has fond memories of the 1980s when it was an ‘exciting time to be a teenager’. She took notice of female role models, such as Madonna, who Sam remembered would proclaim that ‘girls could be whatever they wanted to be’.

During this time, Sam worked hard at school and also helped out at her family’s business during the weekends and school holidays. After passing her exams with flying colours, she took her A-levels and then headed off to London to study English and History at university. Unfortunately, she became homesick and decided to drop out of the course and enrol in another subject at a different university the following year.

But as much as Sam thought gaining a degree was to be part of her future, life clearly had other plans. At around the same time, as she was ready to pack her bags to start the penultimate year of her English and Spanish course, Sam fell in love with the man who would later become her husband. After spending some time studying in Spain, she decided to return home to be reunited with her boyfriend and family.

Although Sam didn’t manage to obtain that degree she had hoped for, she followed in the spirit of those 1980s ‘can-do’ role models and decided that she could still pursue the journalism career she had dreamed of as a 16-year-old, by working her way up the ladder.

“I was doing a horrible office job, when a post at my local newspaper came up selling advertising. And although it wasn’t what I wanted to do, I thought, well, it’s a newspaper, that’s good enough for me. So I did a bit of selling, a bit of admin, and after about five years of being there, I started to write little features alongside the admin job I was doing. In the end, the group editor said, ‘Look, you clearly enjoy writing, would you like to come and train to be a sub-editor?’. So, they trained me for about six months, and after that, I jumped departments from advertising to the editorial department.”

As her 30s loomed, switching careers wasn’t the only change Sam made in her life as she divorced from her first husband. A few years later, following a move to a new city and a larger newspaper title, Sam fell in love and married again, and she and her second husband now have two children.

“I was quite late having my first child, then even later when I had my second – he was a bit of a shock. I’d kind of given up on having any more children by the time I was forty, as I’d had two miscarriages and thought, this isn’t meant to be.”

And, Sam’s children are certainly at the front of her mind when she thinks about her continued participation in the 1970 British Cohort Study.

“Taking part makes me feel special, part of a unique club. I love the fact I am helping to shape the future of others, hopefully for the better by taking part. I’m conscious of being really honest when I do the surveys because I think it’s important to be the most real version of yourself. Maybe when my kids grow up, they will look back and there’ll be policies in place or health discoveries that were made via the contributions of the cohort, particularly as we have been asked to participate in studies relating to the current COVID-19 pandemic. If my contribution in some way helps to make the world a better place, I will have done my part.”