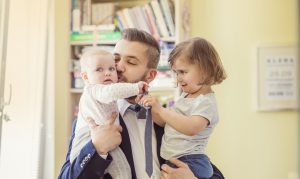 Full-time working fathers earn a fifth more, on average, than men without children, according to a new study published by the Trade Unions Congress (TUC).

In contrast, mothers working full-time experienced a ‘pay penalty’, earning 7 per cent less, on average, than their childless colleagues.

The researchers from the Institute for Public Policy Research analysed data on more than 9,800 people born in England, Scotland and Wales in a single week in 1970, who are part of the 1970 British Cohort Study.

They compared the wages of full-time working fathers and mothers at age 42 with similar men and women who didn’t have children.

The study’s authors explained: “Differences in the wages of mothers and childless women at age 42 may reflect the cost of lost experience or periods of part-time work. Women are much more likely than men to move into part-time work or stop working altogether when they have children.

“The reasons for the fatherhood wage bonus are not clear, though it is likely to be in part due to increased hours worked in comparison to men without children, as well as remuneration for increased effort.”

Mothers who had given birth to their first child before the age of 33 were the worst off, earning 15 per cent less than women who hadn’t had children. However, those who had children at 33 or later enjoyed a 12 per cent pay premium compared to their childless counterparts.

For fathers, those with two or more children fared best financially, earning 9 per cent more than those with just one child.

Differences in personal characteristics of study members, such as education, region and occupation, were taken into account, but these did not alter the results.

The researchers suggested that the study may reflect public opinion that fathers are perceived as the main wage earners while mothers were expected to fit work around caring after children.

They cited a UK poll by the Fawcett Society, which found that 3 in 10 think men are more committed to their job after having a baby – and nearly half of respondents believed women were less committed after having children.

Frances O’Grady, TUC General Secretary, said: “It says much about current attitudes that men with children are seen as more committed by employers, while mothers are still often treated as liabilities.

“While men play a much more active role in raising their children nowadays, many are afraid to request flexible working or time off in case it damages their career prospects.

“We won’t break this cycle unless fathers are given access to independent paid leave to look after their kids, that isn’t shared with their partners. And we need more decently-paid jobs to be available on a reduced hours or flexible work basis. This would reduce the motherhood pay penalty and enable more dads to take work that fits with their parenting responsibilities,” O’Grady added.