Findings from BCS70 about the powerful benefits of reading for pleasure are among the most influential discoveries the study has generated to date. 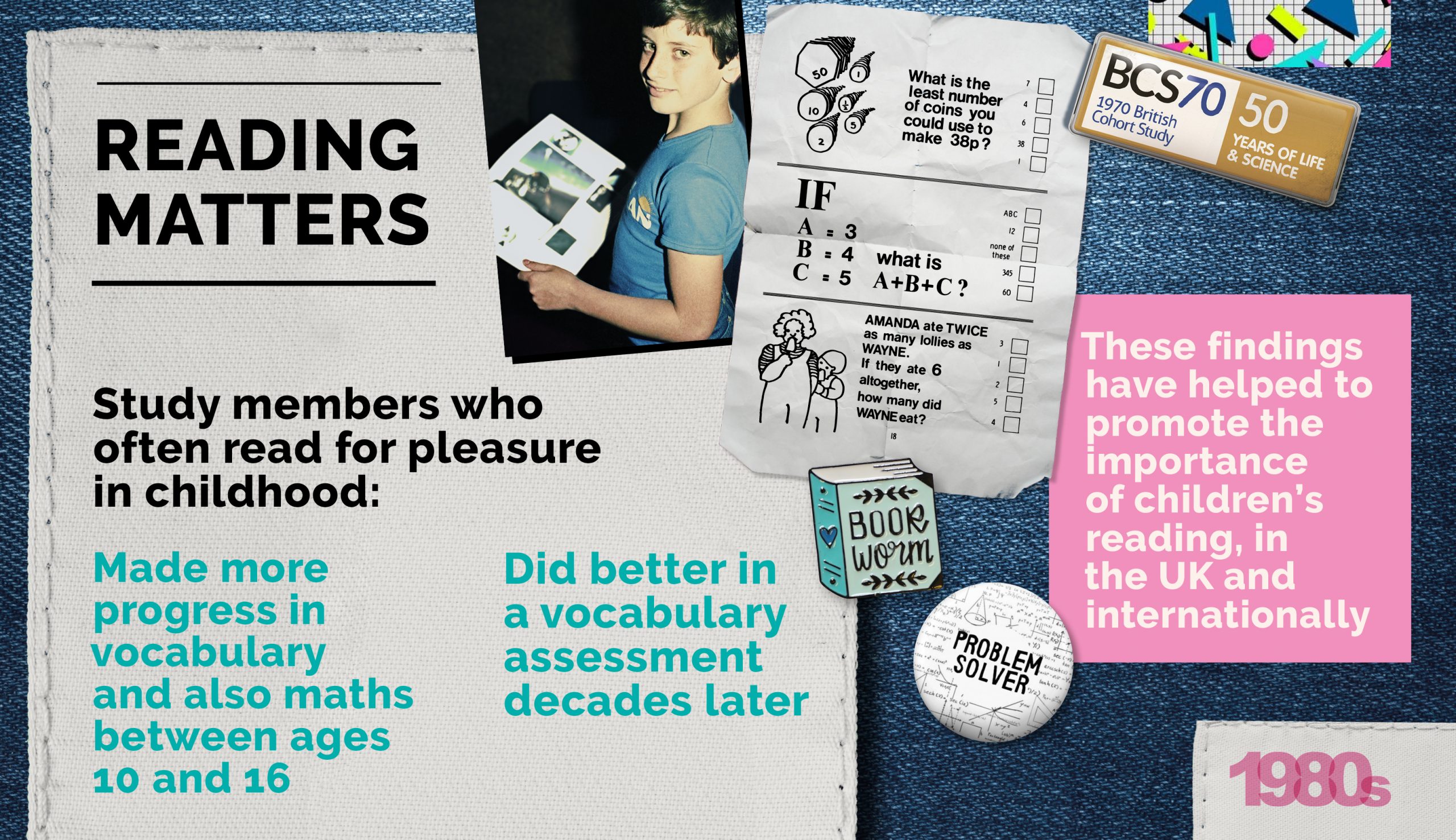 When you were aged 10 and 16, we asked you how often you read for pleasure, and the kinds of things you liked to read. Using this information alongside the results of various cognitive assessments, including a vocabulary task you did at age 16, researchers at the UCL Centre for Longitudinal Studies explored how reading impacted children’s development.

The researchers found that those who had often read for pleasure made more progress not just in their vocabulary but also maths, between the ages of 10 and 16, compared to those who had rarely read.

These findings stood even after taking account of children’s social background. In fact, reading seemed to have a bigger hand in children’s cognitive development than having highly educated parents.

BCS70 has also shown how reading habits in childhood continue to have a substantial influence on people’s vocabulary as much as 30 years later.

When you were 42, we asked you to repeat the vocabulary assessment you had completed at age 16. Those who had read regularly at age 10 scored an average of 67 per cent in the vocabulary assessment at age 42. Infrequent readers scored only 51 per cent. In addition, those who read for pleasure frequently at age 42 had experienced greater growth in their vocabulary between adolescence and mid-life than those who did not read.

And it seems that it isn’t just how much you read, but also what you read that makes a difference. Those who read ‘highbrow’ fiction as adults made the greatest advances in vocabulary between ages 16 and 42. People who read broadsheet newspapers (including online versions) made more progress than people who did not read newspapers, while readers of popular tabloids actually made slightly less progress than those who never read newspapers.

These important findings on the value of reading have been taken up by politicians across the political spectrum, including David Blunkett in a Labour policy review and the subsequent Conservative schools minister, Nick Gibb, when he set out plans for helping schools improve reading standards.

Meanwhile, libraries, library associations, campaigning groups, charities and schools, not just at home but across the globe, have all used the research to help promote the value of reading for pleasure.

Professor Alice Sullivan, co-author of the research, describes the impact it has had:

“That’s one of the nice things about these findings. They seem to appeal to everybody, from parents, to teachers, to librarians, to policymakers. Because I think people do understand that learning is more than just being sort of crammed for a test. The power of reading is a deeper kind of learning. And I think that being able to show that based on a really solid scientific base as well with a very large, nationally representative longitudinal data set, I think, has given a lot of confidence for people like literacy organisations, who want to make that argument anyway, to be on very solid ground and say, you know what, reading is very important.”

You can listen to Professor Alice Sullivan talk about her work on the lifelong benefits of reading for pleasure in episode 2 of our podcast series celebrating BCS70, 50 Years of Life in Britain.