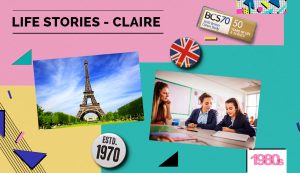 Over the past five decades study members have given their time to answer surveys, take cognitive tests and undertake health assessments. Your contribution has led to numerous important scientific discoveries that have helped to improve people’s lives. But, what has it been like to take part, and who are the people who make up BCS70? Over the year we’ll be speaking to some of you to find out more about your lives and your thoughts on being part of the study.

Claire’s never been in any doubt about whether to continue with BCS70. For her, participating in the study has always been a given in spite of, and perhaps because of, the difficulties she’s had to overcome in her life.

Claire recalls how, in her 30s, the BCS70 interviewer came to survey her at home while she was having treatment for cancer: “I had my bandana on at the time or something. I’ve got a vision of sitting in the room with the person who came.” As she notes, the study needs to capture the reality of life, all of life.

For Claire, that life began in Buckinghamshire, where she was brought up by her mum, a single parent, and her grandparents. When she was four, her mum met the man she would later marry, and who would become Claire’s dad. The family expanded when Claire’s two half-sisters were born.

“I loved it. I just thought it was great, and I was like another little mum to them, and I had my dolls and I’d do the same to the girls as they were babies, and I helped my mum massively, you know, looking after them.”

When she finished school, Claire postponed university and instead headed to France to travel and work. Her gap year stretched out to two. With her now finely honed French language skills, Claire returned home to the UK and completed a degree in business studies and economics.

After university, Claire initially went to work for a world-leading IT company. After a couple of years, Claire was after a change of direction and took up a role with a sports research agency, working her way up to director. Reflecting on her time in the agency, she says: “I think that’s why I was always really keen to carry on with it [BCS70]. Because I know how hard it is to keep people on these surveys.”

But the role was very demanding and Claire became run down and unwell.

“It was really hard work, long hours, weekends, because you’re doing sporting events, and I think I made myself ill, because I’m a bit of a perfectionist and worked too hard. And I played too hard as well.”

Claire decided she needed to slow things down. She left her job and moved to the Kent coast with her boyfriend, who she later married. Here she put her language skills to use in a new venture, setting up her own business teaching French to children at afterschool and lunchtime clubs.

Over the next few years, Claire’s business went from strength to strength until she had about 450 children enrolled on the classes and a team of teachers working for her. But her life then took a difficult turn when, as a new mum, she was diagnosed with cancer. During her illness her husband and sister made the decision to sell the business: “I wasn’t in any state to know even that they’d done it, but it was the right thing to do.”

After her recovery, Claire went back to giving French lessons for a time before deciding to study for a teaching qualification. She now teaches A-level economics at her local grammar school in Kent where she lives with her husband and her two children.

Having thought she would be unable to have more children, after her chemotherapy, she describes her surprise at discovering she was pregnant with her youngest, her “miracle child”: “I’m very lucky that he came along.”