Over the past five decades study members have given their time to answer surveys, take cognitive tests and undertake health assessments. Your contribution has led to numerous important scientific discoveries that have helped to improve people’s lives. But, what has it been like to take part, and who are the people who make up BCS70? Each month we’ll be speaking to a different study participant to find out more about them and their lives. 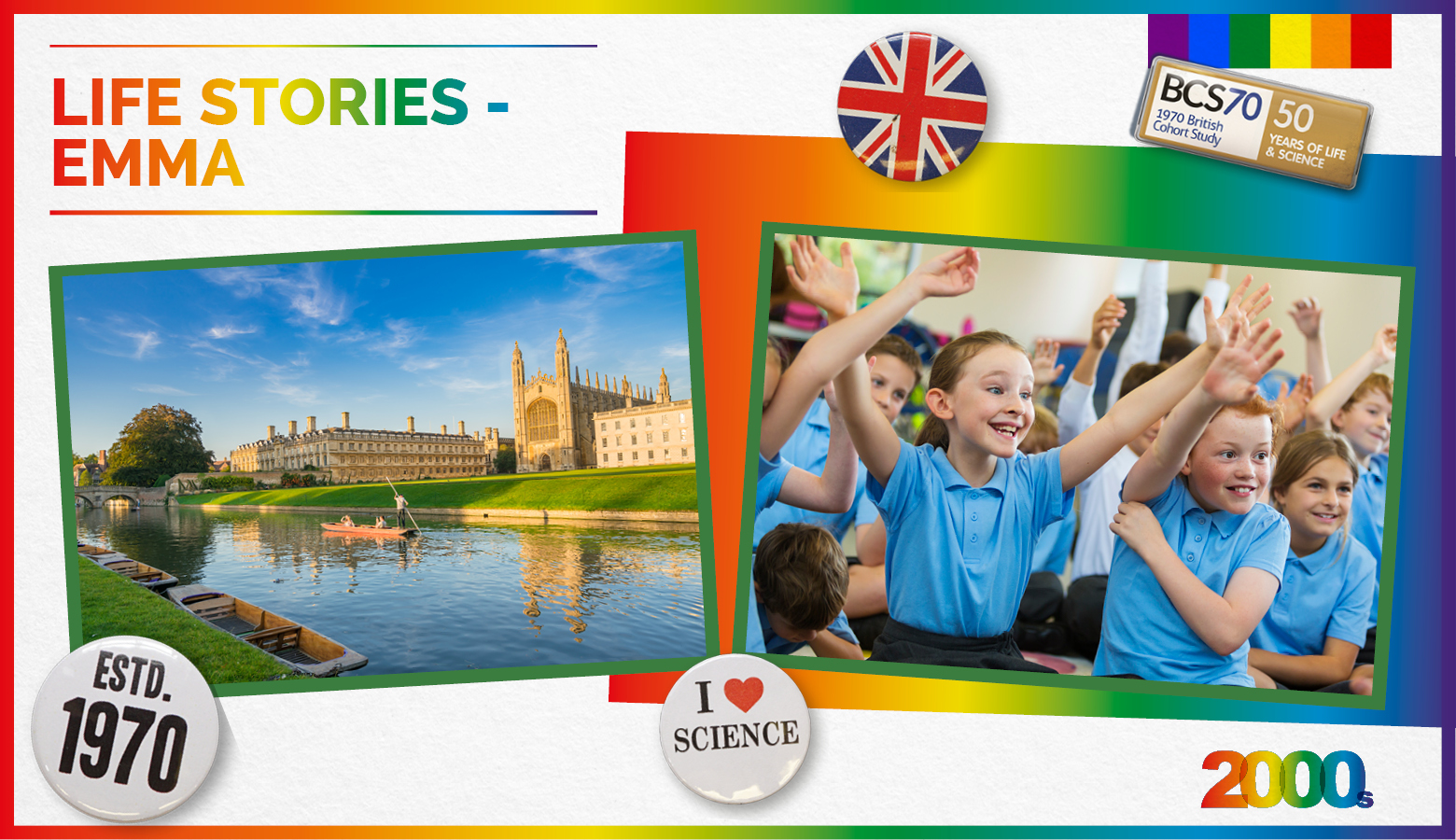 “I wish more people would take more notice of what teenagers have to say, and not compare us to themselves as we are a different generation, we think and act differently. I am satisfied with life at home and at school, but I feel I may be over-protected as I know very little about life after school. I think they should tell you more about this at school.”

This was how Emma responded to a question in the age 16 survey asking how satisfied she was with life, and what would make life better and more interesting for teenagers.

Now, as she reaches her 50th birthday, Emma describes how she has spent much of the past three decades working with children and helping them to prepare for their future.

“I still think the same today about children at school.  If only they had more of an idea what life was going to be like later. I worked in a school for a long time and now work as a private tutor, and that was one of my passions really, bringing people in to talk to children about their careers. I’ve really tried to help give children self-confidence, have aspirations and to think about their future.”

Emma has vivid memories of taking part in the 1970 British Cohort Study as a child, and remembers that her participation made her feel ‘special’, especially as she was asked to complete the survey in the headteacher’s office at primary school.

“I remember my mum taking me to a health centre, and I had to throw a ball up in the air and see how many times I could clap and hop before catching it. It definitely seemed like something special because I was the only one in my school who was doing it. And I started wondering, why are they asking these types of questions?  Why do they want to know this and that?  And, so, it really interested me, and kind of sparked an interest that’s really stayed with me.”

After attending primary school near her family’s home in Oxfordshire, Emma went to boarding school in Worcestershire. She then headed off to Cambridge University to study natural sciences. After working in a research lab, Emma completed a master’s degree in public health and health promotion before taking up a research post at Manchester University.

During her time at Cambridge, Emma met her future husband, and they married soon after she graduated. While they were working in Manchester, the couple started a family. Emma, her husband and three children then moved to Warwickshire to be closer to their parents and families.

As her children were growing up, Emma became a full-time mother, but found the time and energy to help pupils at their local primary school, working there first as a volunteer and then as a member of staff for more than a decade.

“I became a teaching assistant at my children’s school, working on lots of different enrichment projects. I used my background to do lots of science-based projects, helping to create partnerships between schools and scientists. I also helped children with reading and phonics when there was a great drive to do that some years ago.”

Looking back over the past five decades, Emma has no regrets about how her life has unfolded. Although she explains that she hasn’t followed the professional career path she imagined for herself as a teenager, her view on life and its priorities have changed and she is very happy and proud of what she has achieved so far.

“Bringing my children up has really been my main focus. You know, that’s my main thing.  If you asked what have I achieved in life there would be a list of things, but what would be near the top for me personally would be my children. I’m glad about the choices I made as we brought them up and I look at how well they’re doing. And, not just how well they’re doing but how fulfilled they are and independent and getting on with life. So, that feels good to me.”

With her children now all at university, in the last few years Emma has become a private tutor, helping children improve their English and maths skills. She also works as a church trustee and as a volunteer for a charity that raises money for sanitation, hygiene and education programmes in developing countries.

Although she keeps herself very busy, Emma still hasn’t lost that spark of enthusiasm for the 1970 British Cohort Study that was first ignited as a child.

“I think our study is amazing. It’s so important to be able to follow our generation through our lives to see what happens, and it’s also great to see researchers comparing our lives with other cohorts. I think it’s an amazing tool and the evidence we provide informs policies in all sorts of areas of life. And, I think it makes the world a better place.”