Thanks to BCS70 data collected at birth and in later surveys, researchers around the world have made important discoveries about the risks of smoking in pregnancy. Here are three examples of findings from the last 40 years below. 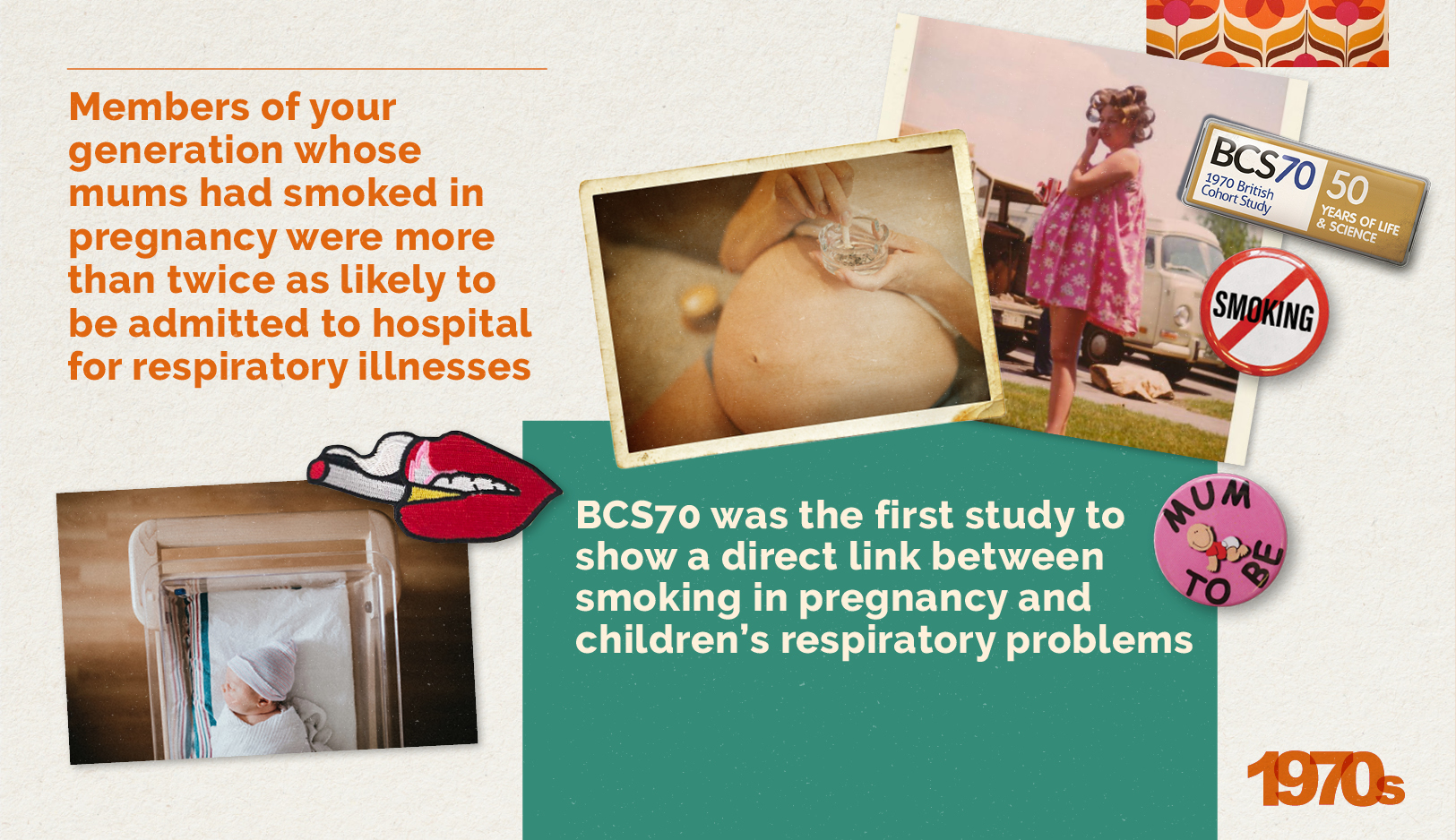 BCS70 was the first to show a direct link between smoking in pregnancy and children’s respiratory problems, helping doctors learn more about how smoking affects children’s development in the womb. Researchers found that members of your generation whose mothers stopped smoking after giving birth were just as likely to visit hospital with respiratory problems, at age 5, as children whose mothers smoked through pregnancy and continued smoking.

When the findings were published more than three decades ago, the report suggested that mothers’ smoking mainly had an impact on the likelihood of respiratory illnesses in children from birth, and only to a lesser extent through second-hand smoke after birth.

Smoking during pregnancy may cause damage to the child’s developing respiratory system in the womb, or could interfere with their immune system, making them more susceptible to respiratory infections in the early years.

Risks of smoking in pregnancy vary by social class

Research using data from BCS70 was the first to show that smoking in pregnancy affected children differently depending on their family’s social circumstances – helping doctors improve their understanding of the protective effects of a good diet during pregnancy.

Findings from BCS70 reinforced earlier research using the 1958 National Child Development Study to show that regardless of social class, mothers who smoked during pregnancy had smaller babies. However, BCS70 was the first study to reveal that for the least well-off mothers, smoking while pregnant had additional implications – their babies were at greater risk of being stillborn or dying soon after birth.

The researchers proposed that advantaged mothers and their babies could be protected from these risks as they tended to have better diets than mothers from poorer backgrounds. Because of the report’s findings, published almost 40 years ago, doctors understand more about the importance of a good diet during pregnancy, helping to improve the advice and guidance provided to mothers.

Researchers from across the globe are still busily analysing data from BCS70 to find out more about the long-term effects of smoking in pregnancy.

Research from a team of Italian academics published in 2019 found that members of your generation whose mothers smoked during pregnancy were not born predisposed to smoking through absorbing nicotine in the womb. Instead, they tended to pick up smoking habits from their mothers when you were growing up.

Children whose mothers smoked in pregnancy and continued smoking were 4 per cent more likely to smoke in adulthood, compared to those whose mothers stopped smoking after pregnancy. The researchers also found that smoking in pregnancy increased children’s chances of developing behaviour problems, but the link between this and being a smoker as an adult only existed for boys and not girls.