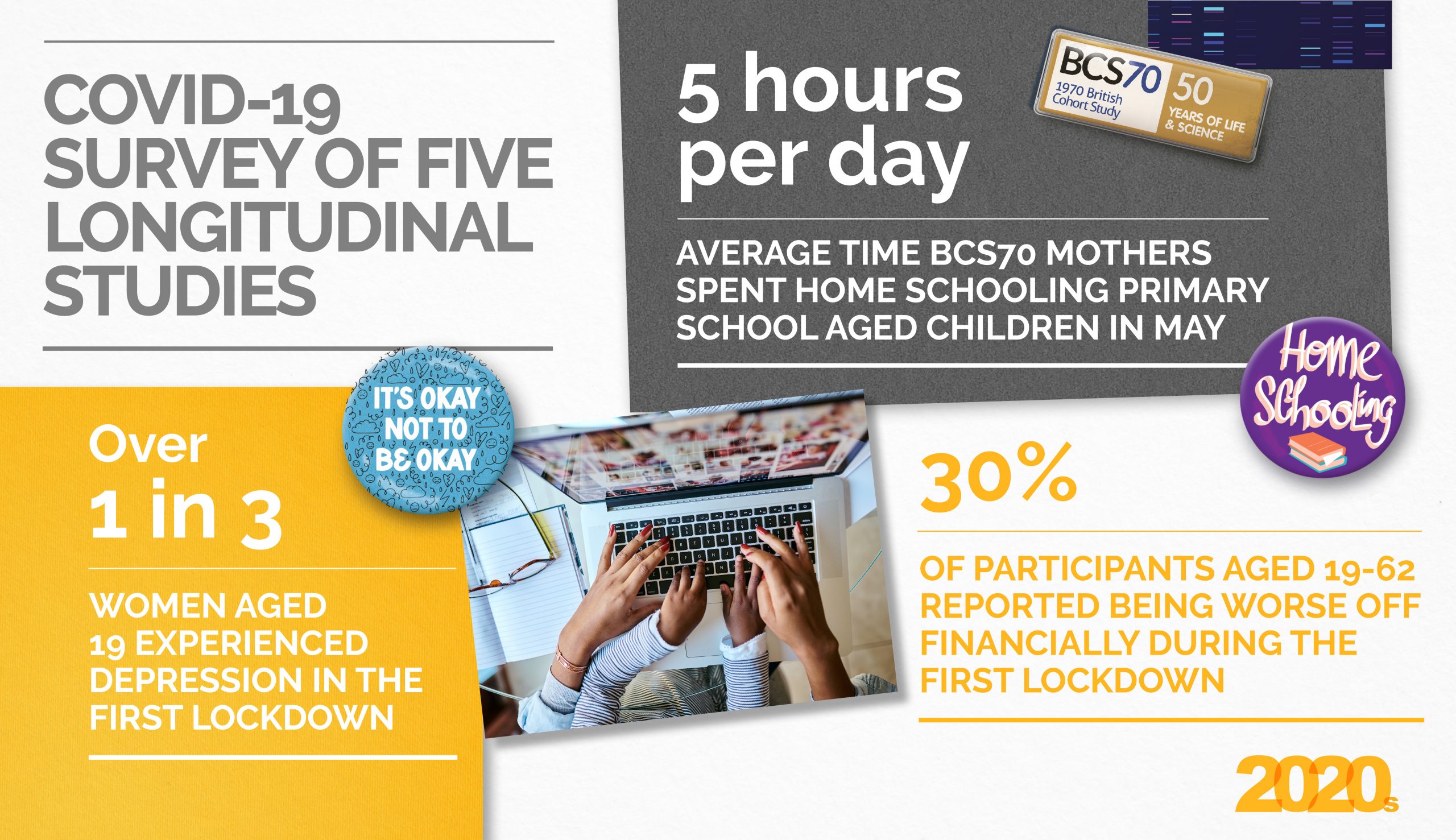 More than a year has passed since the first case of COVID-19 was confirmed in the UK. Since then, the disease has tragically taken the lives of more than 120,000 British people. The necessary public health precautions put in place over the past year to control and reduce the spread of the virus have had a profound impact on all aspects of people’s lives. Now, after such a difficult period, the vaccination programme, which has already given more than 20m first doses, is now helping society to think about the future with some optimism and hope.

During the first lockdown in May 2020, we asked you (and members of the other studies) to complete an online survey about your experiences during the early stages of the crisis. Over 18,000 study members, then aged 19, 30, 50, 62 and 74, completed this first COVID-19 survey, providing invaluable insights into the varying ways the crisis impacted them. Here’s a summary of our researchers’ initial findings.

The average hours worked in Britain dropped by 40% during the first lockdown. For example, the average hours among BCS70 members decreased from 32 per week before the outbreak to 21 hours per week, and 30% of you stopped work completely. In comparison, among 19-year-olds, hours reduced from an average of 25 to 10 per week, and for those age 30, hours dropped from 34 to 22 hours.

The survey also found nearly 30% of survey participants aged 19, 30, 50 and 62 reported being financially worse off in May compared to before the pandemic. Among women, it was the BCS70 women who were most likely to report being worse off (39%), while among men it was the 62-year-olds (37%).

Mothers with pre-school and primary school-aged children spent more time on home schooling and interactive activities than fathers, and were considerably more likely than fathers to have stopped work. BCS70 mothers with primary school aged children were spending, on average, five hours per day home schooling, while BCS70 fathers of children at the same age spent, on average, two hours each day.

During lockdown, living with dependent children was most common among BCS70 participants (37%) and 30-year-olds (30%). Only 5% of you reported that one or more of your children had moved back home. Although the majority of people lived with others, more than a quarter of those in the two oldest generations, aged 74 (26%) and 62 (28%), a fifth (21%) of BCS70 participants and almost one sixth (15%) of 30-year-olds, were living alone during the pandemic.

Participants across all five studies were asked to rate how happy they were in their relationship with their romantic partner during the early stages of the crisis. Average satisfaction was lowest among 19-year-olds, and highest among the oldest participants (aged 74). The proportion of those who reported more arguments with their partner was higher among the youngest groups  (ages 30 and 19) compared to the older generations. Among 74-year-olds and your generation, more women than men reported an increase in arguments with their partner. Interestingly, across all age groups, couples who lived together were no more or less likely to report an increase in arguments than couples who lived separately.

Study members were asked to answer a series of questions about their trust in government and others, and were also asked about their compliance with social distancing guidelines. The findings revealed that BCS70 participants and those from the two oldest generations (ages 74 and 62) reported higher levels of trust in government than the two youngest groups (ages 19 and 30).

Across all generations, the majority of study members (60-75%) reported no decrease or increase in their trust towards others in their local area compared to before the outbreak. For those who did report change, much more change was reported as an increase in trust.

The two oldest generations had the highest levels of compliance with social distancing guidelines with two thirds of 62- and 74-year olds reporting they were completely compliant (10/10). Around half of the members of the three younger cohorts, including BCS70, scored themselves the maximum compliance.

In your own words

The first survey in May included one open-ended question. Study members were asked to express in their own words the main ways the coronavirus outbreak had affected their life and/or their loved ones so far, and what they thought the effects might be in the future.

Across all five studies, a total of 10,793 people answered this question, writing slightly more than 1.2 million words. Researchers found that the most frequently used nouns for BCS70 participants were ‘family’, ‘work’, ‘time’ and ‘home’.

The survey responses included numerous examples of worries about how the pandemic was affecting family and friends. Parents were also concerned about the impact on their children. One woman from your generation wrote:

“The main concern is my children… They are both at interesting and exciting stages of their life, and I do not know how this will now play out and how it will affect them in the next couple of years.”

Financial difficulties, and the impact of these on wellbeing, were another common theme in the responses:

“I have been let go from one [of] my jobs… which has left us without enough money to pay all the bills and keep food in. So we have been using [a] food bank and had help [from] our church to be able to eat.” (Female, BCS70 participant).

However, others wrote about the positive impacts of the pandemic, including spending more time with family and saving money.

“With less things going on outside the home we find we have more time together and more meals together.” (Female, BCS70 participant).

“I am loving working from home and not spending [several] hours a day travelling and [thousands of pounds] a year on train travel, I’m losing weight, eating healthily, sleeping really well and getting out for exercise every day.” (Female, BCS70 participant).

For others the positivity was focused on the reassurance that government assistance had given them:

“Being furloughed has removed the worry that I would have otherwise had.” (Female, BCS70 participant).

The information collected during the second and third COVID-19 surveys will provide further evidence on how the pandemic has continued to impact people’s lives. Data from all three surveys, when analysed alongside the information you’ve been giving us throughout the years, will help researchers learn how prior life experiences might have helped to make you more resilient or vulnerable to the effects of the pandemic.

A big thank you to all study members, across the five studies, who completed our surveys.