Findings from BCS70 have highlighted how periods of being out of education, employment or training after leaving school can impact on different aspects of young people’s lives. This important evidence helped make the case for a raft of government measures to better support school leavers as they moved into the next stage of their lives. 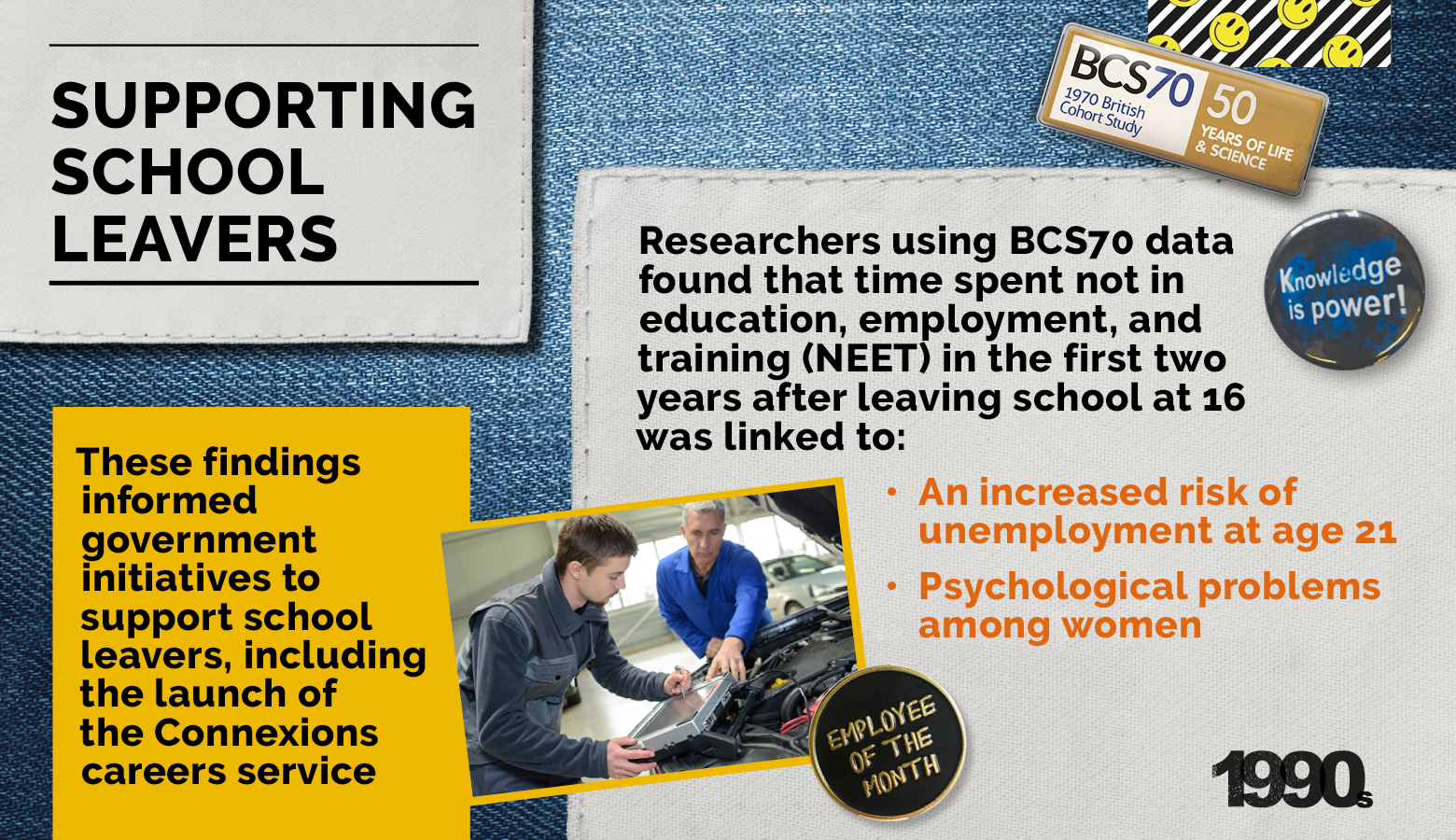 When you were 21 years old, we asked a 10% sample of study members to take part in a special sub study. It was the first time we had caught up with any of you since the Age 16 Survey, so it was an important opportunity to find out what had been happening in your lives since leaving school.

The study found that between ages 16 and 18, around 1 in 10 of your generation had been not in education, employment or training (known as ‘NEET’) for six months or more.

Researchers analysing the information collected from participants found that young people who had no qualifications were six times as likely to have been NEET in the two years after leaving school as those with qualifications at O level or above. Men were at increased risk of experiencing periods of NEET if they hadn’t been read to when they were little and if they had grown up in the inner city or on a council estate. For women, lack of parental interest in their education and family poverty were both risk factors.

The researchers examined how study members were faring in life at age 21. They compared the experiences of those who had been through prolonged periods of being out of work, education and training between ages 16 and 18 with those who had not. For men, the consequences of being NEET in adolescence were mainly linked to future employment prospects; they were over three times as likely to be NEET at 21 if they had been NEET previously, between ages 16 and 18. Women who had been NEET as teenagers were over five times as likely to be NEET at age 21, with many having become young mothers. Women were also greater risk of psychological difficulties at age 21, including feelings of dissatisfaction with life and of a lack of a sense of control, if they had been NEET in those first two years after leaving school.

These findings informed the influential 1999 Social Exclusion Unit report, Bridging the Gap, produced at the request of Prime Minister Tony Blair, which paved the way for the launch of the Connexions careers service for young people at the start of a new millennium.

“…we are now clear about the goal – higher standards of education for all, support for those who need it most, and an end to a situation in which thousands of young people are not given the chance to make a better life for themselves and a bigger contribution to society.” Tony Blair, Bridging the Gap, 1999

Read the research: Social Exclusion and the Transition from School to Work: The Case of Young People Not in Education, Employment, or Training (NEET)

Read the government report: Bridging the Gap, New opportunities for 16-18 year olds not in education, employment or training