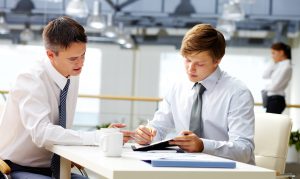 It is only natural for parents to want to help their sons and daughters find a good, well-paid job.

However, many people now accept that this human instinct can have some negative consequences and make it harder to create a more meritocratic society.

Unpaid internships that often lead to lucrative, high-status jobs are a prime, and much debated, example of the problem as well-connected parents are more likely to be able to secure them for their children.

This is one potential explanation for the strong relationship between family background and how well young people do in the labour market.

But how much do we really know about the help that parents, relatives and friends – of all social classes — provide for young people when it comes to getting a job or moving up the career ladder? Newly-published research from the Centre for Longitudinal Studies at UCL Institute of Education provides some fresh and rather surprising insights on this issue.

The analysis of information gathered on just over 9,000 members of the 1970  British Cohort Study found a clear link between the socio-economic status of a child at age 10 and their income and occupation more than 30 years later.

The greater educational achievements of children from more privileged backgrounds provide part of the reason why advantage and disadvantage was passed from one generation to the next.

However, as the age 42 BCS70 survey asked cohort members about the employment help they had received from parents, relatives and friends, the researchers were also able to establish whether this factor helped to explain the link between family background and future earnings.

About half of the cohort reported receiving help from parents and about half said they had been given some assistance from other relatives or friends since leaving school or university. Advice was the most widely reported type of help, especially from parents, but a substantial proportion of those surveyed also said that their parents had helped them find a job through their contacts (29% of men who received any help and 21% of women) or that other relatives or friends assisted in this way (25% of men and 16% of women).

Parents from higher socio-economic groups were more likely to provide advice and assistance with application forms. However, help from other relatives and friends had little association with a family’s socio-economic status.

Even more surprisingly, help from parents in the form of a recommendation to a current or former employer, or in finding a job through their contacts, also had little apparent relationship with family background.

“Our results also indicate that, on average, individuals who report receiving help from their parents do not have higher earnings than those who do not receive such help, nor do they have higher-status occupations,” the study’s authors say. “It would seem therefore that parental help is not necessarily beneficial in the labour market.”

They add, however, that the research community needs to develop better measures of the extent to which parents support their child in school and in the labour market. “We might also usefully explore differences in the way that parental socio-economic group impacts differently on men and women’s eventual labour market success,” they suggest.