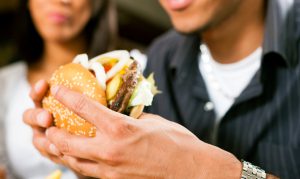 Men are significantly more likely than women to be overweight or obese in middle age, according to new research from the Institute of Education (IOE), University of London.

The IOE study found that more than two thirds of British men (68 per cent) were either overweight (45 per cent) or obese (23 per cent) at age 42. In contrast, 29 per cent of women the same age were overweight and a further 20 per cent were obese.

The research was conducted by Dr Alice Sullivan and Matt Brown from the IOE’s Centre for Longitudinal Studies. They studied the body mass index (BMI) of almost 10,000 men and women in their early forties being followed by the 1970 British Cohort Study (BCS70), which is funded by the Economic and Social Research Council (ESRC).

Although men in this age group seemingly have more cause for concern, the researchers found that they are significantly less likely than women to realise they are carrying excess weight. Thirty per cent of men who were overweight believed they were about the right weight, compared to 9 per cent of overweight women.

Similarly, among those who were obese, twice as many men (50 per cent) as women (25 per cent) said they were only slightly overweight.

Perhaps unsurprisingly, only four in ten men (41 per cent) who were overweight said they were making an effort to shed excess pounds, compared to two thirds (66 per cent) of women. Obese women were also more likely to be trying to lose weight (77 per cent compared to 62 per cent of men).

Dr Sullivan will present the findings at a seminar in London on 7 November, as part of the ESRC Festival of Social Science. She will underline the importance of making men more aware of their BMI status and the health risks associated with excess weight.

“People who are overweight or obese face a higher risk of many health problems, including cardiovascular disease, diabetes and certain cancers,” she says. “But carrying excess weight is far more socially acceptable for men than for women, and men will not respond to health messages about weight and obesity if they do not recognise that they are overweight.”

“This is a particular concern given that cardiovascular disease is the leading cause of death for men aged 35 and over.”

“People born in 1970 grew up at a time when lifestyles were becoming increasingly inactive and high-calorie convenience foods were widely available for the first time,” says Dr Sullivan.

“We know that both exercise and diet are important for maintaining a healthy weight. But our findings show that ready meals, frozen foods, and takeaways are popular with this generation, while nearly a third (32 per cent) of women and a quarter (24 per cent) of men do no vigorous exercise in a typical week.”

“It may seem surprising that more men do vigorous exercise than women, even though they are more likely to be overweight or obese. This suggests that poor diet is a key factor affecting men’s weight in particular.”