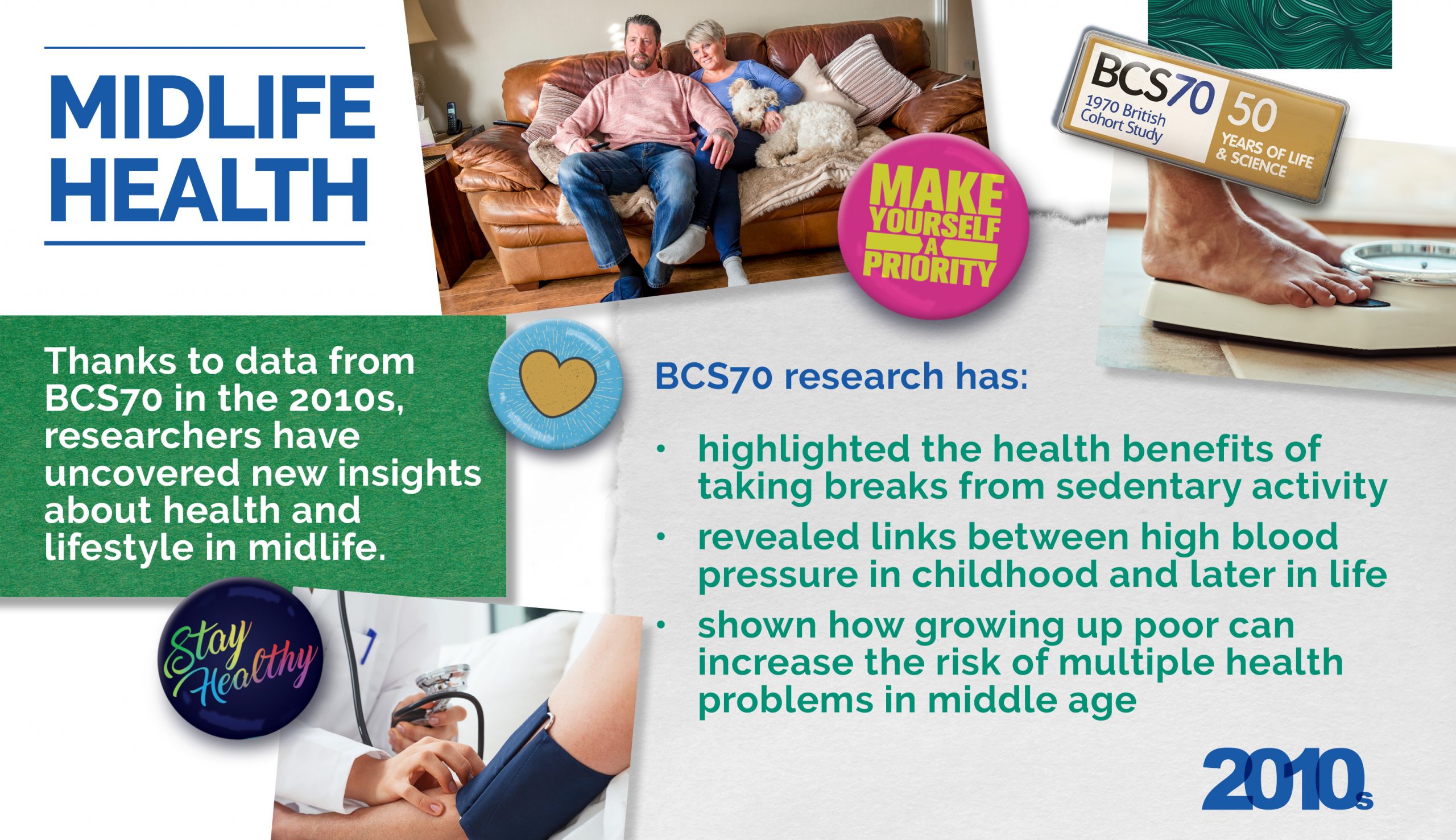 The Age 46-48 Survey had a major focus on health, for the first time since childhood. We carried out a wide range of measurements and assessments about your health, including blood pressure, grip strength and balance. You were also asked to provide blood samples so that we could analyse, among other things, levels of cholesterol. The information you provided has been used in a range of important research exploring the factors associated with good and poor health in midlife.

In a BSC70 first, for the Age 46-48 Survey, we asked you to wear a monitor on your thigh for a week so we could record your physical activity – including time spent sitting, standing, moving and sleeping. Almost 6,500 of you agreed to the thigh-worn activity monitor, with more than 83% (5,300) returning monitors with useable data for at least one day of wear. The data collected, analysed in conjunction with other rich survey information, has enabled researchers to examine how physical and sedentary activity impacts people’s health.

In one study, researchers found that those who spent the most time sitting – more than 10 hours a day – were more likely to be obese, to smoke and to report higher rates of poor health and disability.

In another study, researchers used the activity monitor data alongside other information collected to investigate physical inactivity as a risk factor for diabetes.

We asked you if you had been diagnosed as diabetic and if you were taking medication for diabetes. In addition, the blood samples you had provided were analysed for levels of HbA1c – glycated haemoglobin. A high level of HbA1c means there is too much sugar in the blood.

The researchers found that taking breaks from sitting down were important for reducing people’s risk of diabetes. Each set of additional 10 sedentary breaks (the transition from sitting to standing) per day was associated with 20% lower odds of developing diabetes. In addition, independent of total sedentary time, each extra hour of moderate to vigorous activity was associated with 58% lower odds of diabetes.

Blood pressure then and now

The long roots of childhood

In a separate study, researchers used the information you provided and the health measurements from the Age 46-48 Survey to analyse the factors associated with having multiple health problems in midlife (such as hypertension, diabetes, heart problems and mental health problems).

The researchers found that around one third of you had two or more long-term health conditions at age 46-48.

The most common individual health problems were high-risk drinking (26.3%), recurrent back problems (20.9%), and mental health problems (19.1%). Among the most frequent chronic physical health conditions were asthma/bronchitis (11.7%) and arthritis (7.7%).

The researchers found that those who grew up in the poorest families were at increased risk of having multiple health conditions in middle age. Other risk factors included lower birth weight, lower cognitive ability (at age 10), higher BMI (at age 10) and more emotional and behavioural problems at age 16.

Prevalence and early-life determinants of mid-life multimorbidity: evidence from the 1970 British birth cohort