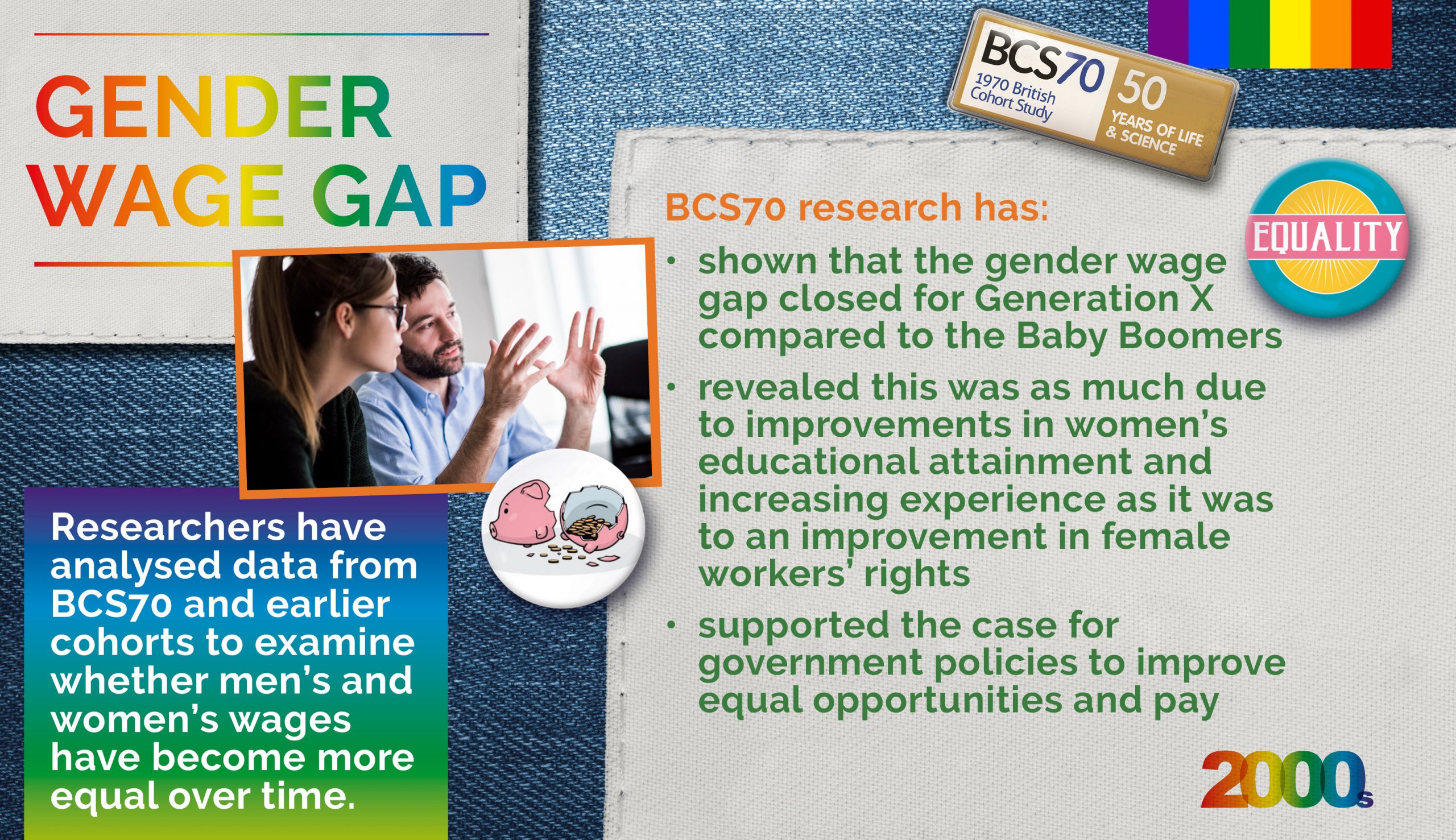 With the numbers of women joining the workforce doubling from the 1930s to the 1980s, legislation was introduced in the 1970s to address pay inequalities between male and female workers. The 1970 Equal Pay Act and 1975 Sex Discrimination Act were enshrined in law with the aim of setting equal pay for equal work, and to make it unlawful to discriminate in the workplace on the basis of sex.

Britain’s birth cohort studies, including BCS70, have been some of the leading sources of evidence on women’s education, employment and pay, helping us to monitor and understand the possible factors behind the gender wage gap. BCS70 has been studied along with similar studies of people born in 1946 and 1958, to find out what has led men’s and women’s pay to become more equal over time, and to shed light on the effectiveness of government policies aimed at reducing pay inequalities.

For example, when those born in 1958 were age 33, 37% of women employed full-time had either a degree or diploma level qualification, compared to 32% of men. For BCS70 members in full-time work at age 30, these proportions had gone up to 47% for female and 38% for male full-timers.

And, although men had more work experience than women among those in the 1958 study, the gap in work experience was less than a year for those in BCS70 in their early 30s. Indeed, if the typical female full-timer of your generation had been remunerated at the same rate as a male worker with similar qualifications and work experience, she would have received higher pay than the typical man, when actually as we have seen, she received 9% less.

More recent research has shown that gender wage inequality increased again for all three generations as they reached their 40s. Among those born in 1946, the wage gap for full-timers increased to 48% at 43, for those born in 1958 it had gone up to 33% at 42, and for BCS70 study members it had reached 25% at the same age. As with the 1958 generation, an important part of this widening gender wage gap with age appeared to be due to interruptions in women’s full-time work experience, probably to raise a family, but there also appeared to be an element of unequal remuneration of equally qualified and experienced employees, even for those working full-time.

Data from BCS70 has allowed us to understand more about the gender wage gap and female workers’ rights. It has provided evidence to support policies that could help to increase equal opportunities and pay, such as flexible employment and shared parental leave, mid-career recruitment and retention, and opportunities for promotion.

Listen to Professor Heather Joshi discussing how BCS70 has provided evidence on the gender wage gap in our 50 Years of Life in Britain podcast series.

More or Less Unequal? Evidence on the Pay of Men and Women from the British Birth Cohort Studies (2007)

A Short History of the Gender Wage Gap in Britain (2020)